Looking for great (and cheap) Williamsburg restaurants near the Historic Area and Great Wolf Lodge Williamsburg for a meal that will satisfy you and won't break the bank?

Well, you could take my word for it (and I hope you do). But I haven't eaten everywhere in Williamsburg (sob-- although maybe that's a good thing, since there are so many great restaurants to choose from). And there can be safety in numbers (after all, what if you don't agree with my review?).

So here's what I'll do. I'll tell you MY top picks for cheap Williamsburg restaurants, THEN share the results of one Virginia Gazette's "Best of Williamsburg" poll based on what their local readers recommend for dining out in and around the Historic Area and beyond. Then you can make your own decision about where you should spend your hard-earned dining dollars.


Sure, I could direct you to a variety of fabulous but expensive restaurants I love (La Yaca, a lovely French restaurant comes to mind with its prix fixe menu and my favorites, lobster crepes and chocolate mousse). But I love to save money, so I'll limit my self to my cheap Wiliamsburg restaurants picks. 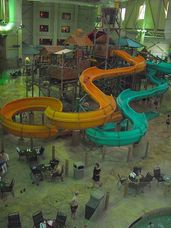 Here's OUR two picks for the top bargains in Williamsburg restaurants:

An inexpensive buffet powerhouse, such a delicious (and filling) bargain that we've been going here for years. From sushi to Thai, BBQ to french fries, donuts to ice cream, you can find it here. Cuisines include Chinese, Mongolian BBQ, Korean, Vietnamese, Japanese (their sushi -- transported on an endless sushi "train"-- is plentiful and delicious--I recommend their California and spicy rolls!), and Hong Kong-style dim sum.

You can literally stuff yourself silly here, so it's a great option if you want to maximize your dining dollars. If you can (believe me, it's tough), try to leave room for some self-serve vanilla and chocolate ice cream. It's probably the best, most comprehensive Chinese buffet I've ever been to. And it's just a short drive (5 minutes) from Colonial Williamsburg and a 10 minute drive from Great Wolf Lodge.

Peking Restaurant it located in Kingsgate Shopping Center, just a block or two from Pirate Golf. They're open 7 days a week for lunch and dinner. Cost: Lunch is $6.99 Monday-Friday and $7.99 weekends; dinner is $10.99 daily.

(They also serve take-out, so why not pick some up and have a picnic on Duke of Gloucester Street as you watch the costumed interpreters walk by?) 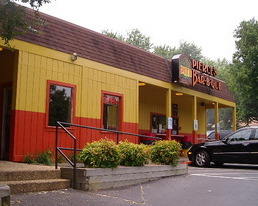 Just off the interstate (and literally one mile east of Great Wolf Lodge), this unique fast food spot is a BBQ-lovers' dream (and close to both Prime Outlets Williamsburg and the Williamsburg Pottery.

They have delicious pulled-pork and pulled-chicken sandwiches, tantalizing ribs, and the funkiest sweet potato fries I've ever tried (bigger than your thumb, crunchy on the outside and creamy on the inside).

Inexpensive, but so famous among Williamsburg restaurants that it's always packed. Don't worry--it's a fast food joint so you won't have to wait long for a table. Or, just eat it in your car on your way to buy more Williamsburg shopping bargains. 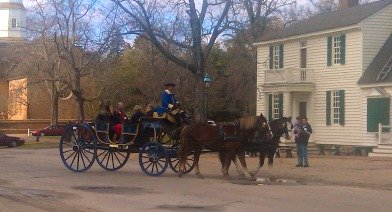 Readers of The Virginia Gazette have voted Old Chickahominy House, Peking Restaurant, Berret's Seafood Restaurant and Taphouse Grill, and the Trellis Restaurant among their top restaurant picks for "The Best of Williamsburg."

Readers voted in 90 categories. Here are some of the highlights of Williamsburg restaurants:

Best Italian: Sal's by Victor (it won for "Best Pizza" too).