Washington Monument - Need to Know Before You Go

NOTE: The Washington Monument is closed to the public until Spring 2019 as they work on a new elevator and screening center. I'll update this page once they've reopened.

A lot of people skip the Washington Monument. Oh, they see it alright...but only in the distance, or from the ground. What a shame! It IS worth the wait to get the best views in town.

Better yet, why wait at all? You don't have to! I'll explain in in a minute.

Okay. The tour is free...but you do have to have a ticket. You can pick up free tickets at the Lodge, located just in front of the Monument.

Splurge for reserved tickets for the Washington Monument tour. They're worth it!

At 8:30 am each morning, they give out free, same-day, timed tickets on a first-come, first-served basis. You can pick up up to 6 tickets at a time, and you can choose your visiting time (based on availability).

Ah yes, that's the problem. What if they're sold out? What if the time you're given doesn't fit in with the rest of your tour plans? Since tickets run out quickly during the spring and summer season, the line for tickets forms as early as 7:00 am.

Do you really want spend an hour or more of your hard-won vacation to Washington DC standing in line when you don't have to?

I didn't. So I splurged $1.50 each for reserved tickets. Not a lot of people know about these, but boy, are they worth it!

They were easy to buy online, and it was so wonderful to be able to just walk (okay, run...we were in a hurry) up to the building at 3:30 pm for our 3:30 pm tour. I definitely recommend them! (Click here to book your tickets online.).


One criticism I have of the Washington Monument tour is how little history they give you. Once you go in through vestibule and the security scanners (backpacks are allowed; bottled water must be carried upright in your hand), there's really only a small hall to wait in while the elevator makes it way down. Yep, only one elevator going up...only one going down. That's why the lines can get so long.

As for taking the stairs...can't do it--not anymore at least. They closed the stairs after Sept. 11, 2001, and haven't reopened them since (except for one floor).

Okay, back to the entry hall. It's tight, and there's precious little to look at, save for a binder with photos of the monument in various stages of construction. 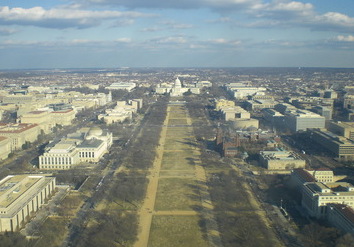 This amazing view of the White House is from the Washington Monument.

At the top, there are two floors. The first is the observation floor where you can look out the windows. They're small (only a couple of feet across), but the views are spectacular (see my photos!). You're completely enclosed (a plus for those with vertigo, a possible minus for the severely claustrophobic, especially on a crowded day).

The floor just below (reached by stairway) has a few exhibits on how the monument was built. But if you're like me, and have kids tugging your arm to "Come see this, Mom!", it's hard to get enough time to read them. And on a crowded day...good luck.

So you'll need to do brush up on your history before you go. Being a History teacher, I'll be happy to start you on your way(see below)...

Look! It's the President!

After that, you get back on the elevator to make your way down. Part way down, they'll slow down long enough for you to see out the back of the elevator and view some of the interior stones which were donated by states, territories, and organizations.

One little known fact: Many of these stones had inscriptions which had nothing to do with George Washington (such as one from a temperance society which criticized alcoholic beverages). One, donated by Pope Pius IX, so outraged anti-papists that it was stolen and thrown in the Potomac.

If possible, try to visit the Washington Monument at the beginning of your visit. The views are so amazing that it's like having a bird's-eye view of the city, and it will help orient you when you start walking around the city. It's the first place we visited on our weekend, and it was so worth it.

We even had an added bonus! While on top of the Monument, we noticed a huge crowd gathered on the South Lawn of the White House. "Looks like a group of reporters," I said.

As we left the Washington Monument, guess who flew over? Yep. The President in his helicopter, Marine One!

Here's What You Won't Learn on the Tour...

The view of the Capitol building from the Monument.

First, why is the Washington Monument the tallest building in our nation's capitol? Because it was decreed in 1884 that no building in the city could be built taller than the Monument.

Shaped like an Egyptian obelisk, it was built specifically to honor our first president, George Washington. It is 555’ 5 1/8” tall, and was finished on December 6, 1884.

Construction began in 1848 by the Washington National Monument Society. All went well for 6 years...until they ran out of money and construction ceased. Thanks to a continued lack of funds--and a pesky little thing like the Civil War--construction didn't resume until 1879.

Get up close, and you'll notice something: About 150 feet up, the marble turns a slightly different shade. Why? Well, when construction finally resumed, they used marble from a different quarry. They finally set the capstone on December 6, 1884, and it was officially opened to the public on October 9, 1888.

Two other little details. If the pyramidal point on the Washington Monument seems shiny, it's because it's made of aluminum (considered a rare metal at the time). How much did the Monument cost? About $1,187,700!


For more tips for planning your visit, return from Washington Monument to Washington DC Main Page